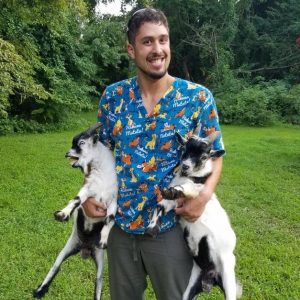 Corey has always had a love of animals all the way from his early childhood. Growing up there was always some kind of pet in his house. From his two goldfish Ren and Stimpy to his Ornate Box Turtle K.C. and everything in between. Corey’s passion for animals was actually what allowed him to decide upon a major at Rutgers University where he graduated with a Bachelors in Companion Animal Science in 2012. While in college Corey was a member of the Rutgers Seeing Eye Puppy Raisers Club where he was a Puppy Sitter. It was through this club that Corey realized he wanted to make working with animals his career.

Upon graduating he became a certified dog trainer through a year long mentorship with Dawn Watson of Brother of the Wolf LLC. As a trainer he was able to instruct friends and family members. With his experience and knowledge of dog behavior he was able to secure a job with Pet-A-Pet, a local pet sitting company where he flourished, often taking on clients with troubled dogs. When not pet sitting, Corey volunteered his time at the PennVet Working Dog Center, where he was instructed on the in’s and out’s of various working dog fields, from Search and Rescue to Medical Alert Dogs.

Corey joined the HousePaws family in October 2015 as a kennel assistant and has shown a strong desire to advance his knowledge and experience in the field of Veterinary Medicine, whether it be through becoming a certified Veterinary Technician or Veterinarian. When not working, he can be found with his nose buried in a book, grooving on his saxophone, or sketching away in his sketchbook.